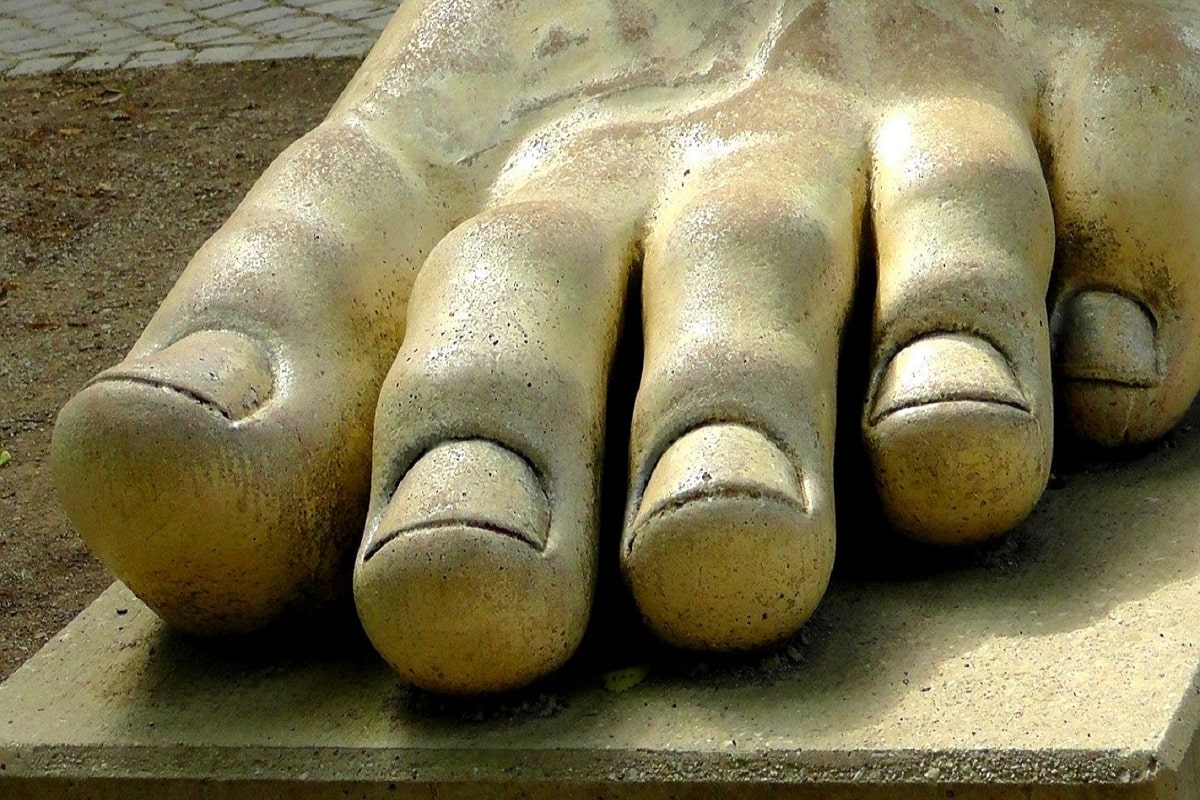 The term hallux valgus defines a deformation of the first toe that appears more or less deflected towards the other toes, with the consequent external protrusion of the first metatarsal.

It is a disorder that affects not only the bone and joint structure, but also the connective structure, since it involves inflammation of the mucous bag located under the big toe. The appearance of the foot is significantly changed following the deterioration of its anatomical connections, which is responsible for the consequent inflammation .
This disorder is characterized by the presence of pain that occurs both with acute crises and with a constant and less violent perception; in any case, the pain always remains.

Consequently to the lateral deviation of the big toe, the formation of the so-called “onion” arises, an evident extremely painful protuberance due to the bursitis connected to it.
Rubbing with the shoe contributes to worsening the pain, up to real attacks that require taking anti-inflammatory drugs.

If neglected, the hallux valgus worsens over time, even considerably compromising the person’s ambulatory skills.
The clinical picture is manifested by pain, inflammation, swelling and deformation of the foot; a thickening of the skin ( hyperkeratosis ) is often visible on the external bone protuberance.

Initially asymptomatic, this disorder becomes noticeable usually following the fit of shoes that are narrow on the tip, which therefore tend to rub on the deformed bone.
In addition to chronic inflammation and pain, hallux valgus can cause the appearance of skin ulcerations , calluses and bone lesions which, over time, often lead to postural problems.

Generally more common in women, this disorder is typical of old age and, as a rule, is associated with the presence of flat feet .
Even if no reliable data are available, it seems that there is a probable inheritance of the problem which however is mainly caused by the use of inadequate footwear.
We speak, therefore, of primary (congenital) and secondary (acquired) form.

Other factors predisposing to the disease are represented by ‘rheumatoid arthritis and especially gout, which, as you know, is to uric acid deposition crystallized precisely at the joints.
The laxity of muscle and connective tissue, typical of some genetic pathologies, such as Marfan Syndrome , can be considered a trigger.

Hallux valgus is diagnosed by simply observing the anatomical shapes of the foot; for a clinical evaluation, it is instead necessary to resort to a baropodometric examination . It is a test that allows you to measure the static and dynamic position of the foot, i.e. when stationary and during walking, to quantify the weight distribution of the loads on the limb and the degree of impairment of the big toe.

In the loading position, it is also possible to perform an X-ray that allows to evaluate the anatomical changes present.
It is important, then, to calculate the angle formed between the big toe and foot, which, if it is greater than 8 degrees, confirms with certainty the diagnostic hypothesis.

Taking into account the fact that this problem, by its nature, tends to get worse over time, it is always advisable to define a therapeutic protocol together with the general practitioner or a specialist in orthopedics.

In the therapy of hallux valgus it would be a good rule to start from a conservative treatment, whose role consists in minimizing the painful symptoms, but without intervening invasively. In this regard, braces for the big toe are particularly effective, which prevent the onion from rubbing against the shoes and slightly force the bone to straighten. They can be purchased in pharmacies, such as the Epitact Hallux Valgus .

When conditions permit and if the situation appears to be particularly compromised, surgery must necessarily be resorted to, which remains the only viable option to definitively resolve the problem. The purpose of the operation is to bring the big toe back to its anatomical position, intervening on ligaments, nerves and tendons, to realign it with the other 4 fingers.

It is a percutaneous osteotomy performed under local anesthesia, which allows a very rapid recovery and a low invasiveness.
An alternative option is represented by arthrodesis or resection arthroplasty , also known as Keller technique .

Age, general health conditions, lifestyle, professional activity and above all the severity of symptoms are variables that can influence the choice of the intervention.

The choice of footwear appropriate to the shape of the foot is one of the indispensable prerequisites for contrasting the progression of the disease; Narrow toe footwear should always be avoided. The sole should adapt to the heel almost perfectly and the heel should never exceed 5 centimeters; even satin-to-ground soles are not recommended.

The most suitable shoes should resume the natural shape of the arch of the foot to provide protection, support and containment for the foot.
Flexible shoes are the most suitable precisely because they do not rub on the metatarsus and do not encourage the onset of inflammatory processes.

Since the Achilles tendon must remain tight, it is advisable to use shoes with an anatomical upper , capable of distributing the weight of the body with balance.
It is strongly recommended the use of insoles, which help to realign the bone structures of the foot.
These devices also avoid overloading the front of the foot, limiting pain.

Spacers are also recommended, aimed at eliminating interdigital friction, as well as adhesive pads for joint correction.
The use of special splints is very useful for straightening the position of the big toe .

Physiotherapy is prescribed to relieve pain, although it must be associated with NSAID-type anti-inflammatory drugs.
In particularly severe cases, it is possible to resort to local injections with corticosteroid drugs.