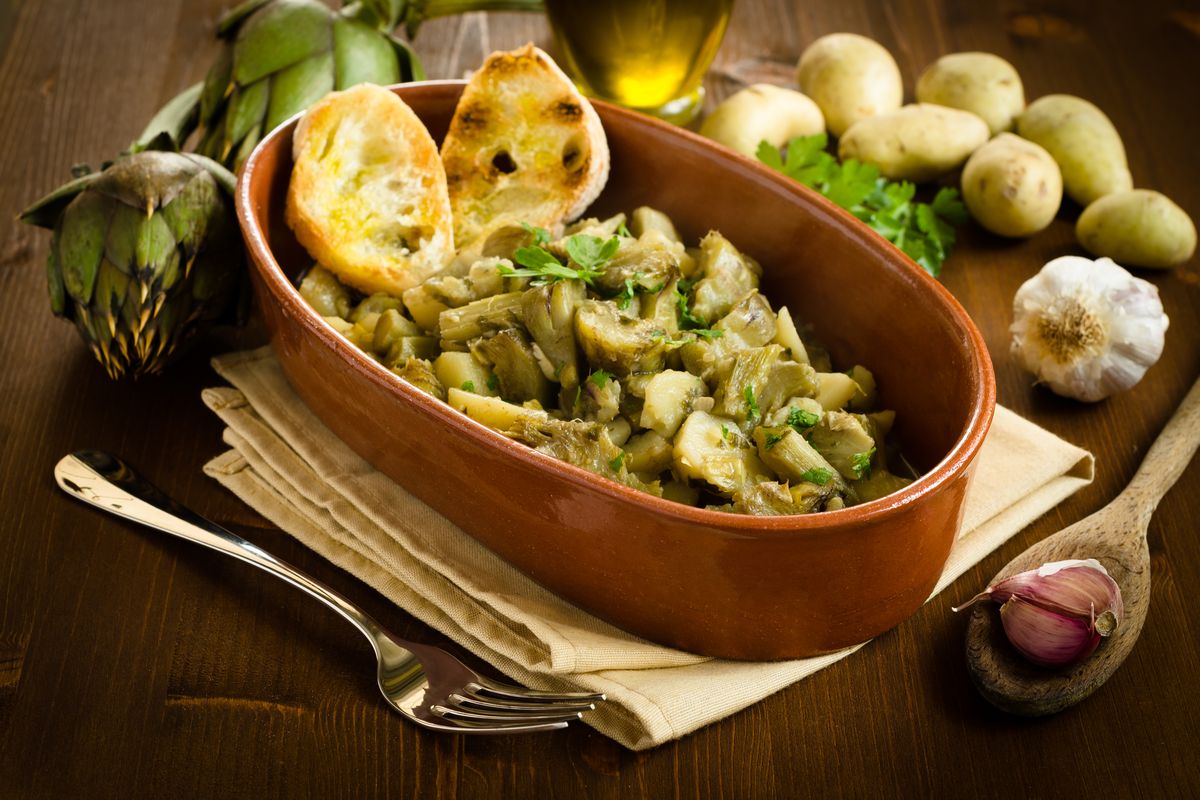 If you are looking for a simple but tasty recipe to bring to the table, the stew with artichokes is the right recipe for you.

Today we intend to offer you a simple recipe, perfect to take out when you do n’t know what to cook for dinner : stew with artichokes. We have prepared it with veal , so as to be sure that even after cooking it remains tender, but it can also be made with beef or, for a lighter and faster version, with chicken .

This second course of meat lends itself to different variations . For example, there are those who love to prepare it by adding potatoes or peas and those who still cook it in a pressure cooker . We will see all these preparations so as to give you the possibility to customize your veal stew with artichokes according to your tastes. Trust me, it’s a simple recipe that everyone can successfully prepare!

How to prepare the recipe for stew with artichokes

Instead, to prepare the stew with artichokes and potatoes you have to proceed as follows. Peel the potatoes , cut them approximately the same size as the meat and add them to the pan immediately after browning the meat. Pour 1 glass of water or broth instead of half and cook. If it gets too dry, you can always add more liquid a little at a time. For the variant with peas, on the other hand, we advise you to cook the latter together with the artichokes and then continue as per the recipe.

In all cases, we recommend that you also try our veal stew : it’s really tasty!

Stew with artichokes in a pressure cooker: an easy second course

Beef stew is a really tasty second course, but not really quick to prepare. So what would you say if we told you that you can prepare the stew with artichokes in a pressure cooker? The process is similar, but cooking times will be halved .

As per recipe, brown the chopped onion in oil and butter . Add the floured morsels and brown them for a few moments before blending with the white wine . Pour in the broth , a pinch of salt and a pinch of pepper and close the pressure cooker. Put the flame on high and as soon as it starts to whistle lower it to the minimum, calculating 20 minutes of cooking from this moment.

Then turn off the heat, let it breathe and open to add the cleaned artichokes cut into wedges. Close and cook for 10 minutes from the whistle. If the sauce is too liquid when cooked, let it thicken without a lid.

The stew with artichokes can be kept in the refrigerator for a couple of days. Serve it by heating it briefly in a pan.