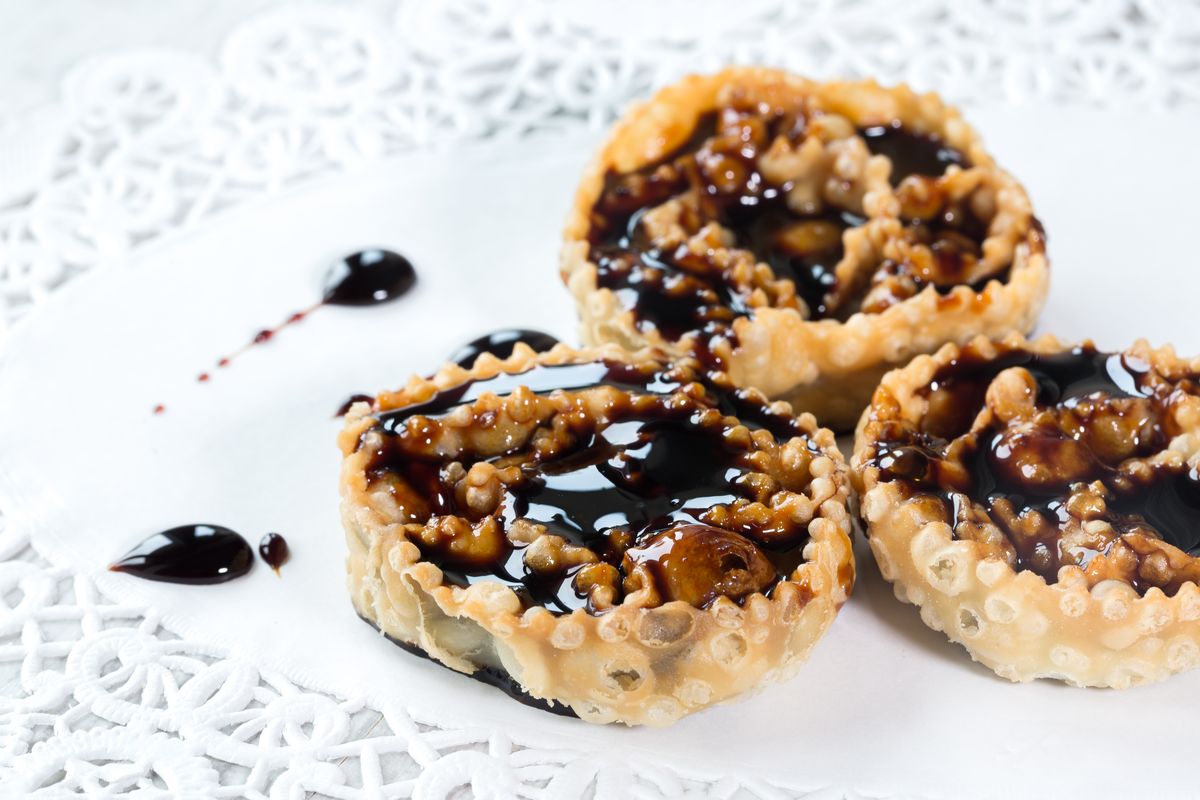 When it comes to Apulian Christmas sweets, you are spoiled for choice: cartellate, mostaccioli and amaretti are the protagonists of the holidays!

What a land Puglia : with its coasts and its crystalline sea it is the destination of summer holidays for many. Yet even the coldest season, the one close to the holidays, should be considered for an escape of a few days , if only to taste the Apulian Christmas sweets. In fact, even here, as in many other regions of southern Italy, Christmas cannot be taken lightly.

On the day of the Immaculate Conception, the preparations begin: the families get together and begin the production of a whole series of recipes of Apulian Christmas sweets, one better than the other. There are several points in common between the various preparations, one above all the vincotto . Then spices and chocolate are inevitable. Finally, what about frying , the cooking technique that takes these simple desserts to the next level?

During the Christmas period, the streets of small villages as well as those of large cities smell of vincotto, spices and fried food . At first glance, in fact, the ingredients of the Apulian Christmas sweets always seem the same and yet the wise housewives manage to make them all different, one better than the other.

Let’s take the cartellate for example. The dough is simple and is prepared with flour, oil and white wine then spread very thin and cut into strips, as if they were the queen of pasta. They are then wrapped around themselves, stopping the closure in some places, and fried. The result? A sort of chaplet that evokes the dahlia of San Nicola or the crown of the magi. The cartellate are then served with honey vincotto, sugar sprinkles and dried fruit.

Using the same dough as the cartellate, the pads are prepared, also known as calzoncelli . As the name suggests, their shape resembles that of a pillow, the same on which the Baby Jesus rested. The appearance resembles that of ravioli, while the filling is based on almond paste flavored with lemon . But what makes these sweets so good is the frying, done strictly the day after their preparation.

Chopped almonds, sugar, eggs and lemon zest give life to the macaroons . When it comes to Apulian Christmas sweets with almonds, the first thought can only be addressed to them. They have the shape of a ball decorated with candied cherries, almonds or coffee beans which is then baked in the oven. It takes experience to get the right consistency, but once you’ve found the square of the circle you won’t be able to stop preparing them.

Let’s stay on the subject of sweets with almonds, to which vincotto and cocoa are added, to talk about sassanelli . Once again the experience of the housewives comes into play to obtain the right cooking of the dessert, very difficult to guess due to the presence of cocoa.

Last but certainly not least, the mostaccioli . Also present in other cuisines of southern Italy, their main ingredient is cooked grape must prepared during autumn. To this must be added spices, cloves and cinnamon are inevitable, and a delicious chocolate coating.

What do you think? Have we convinced you to visit Puglia for Christmas?