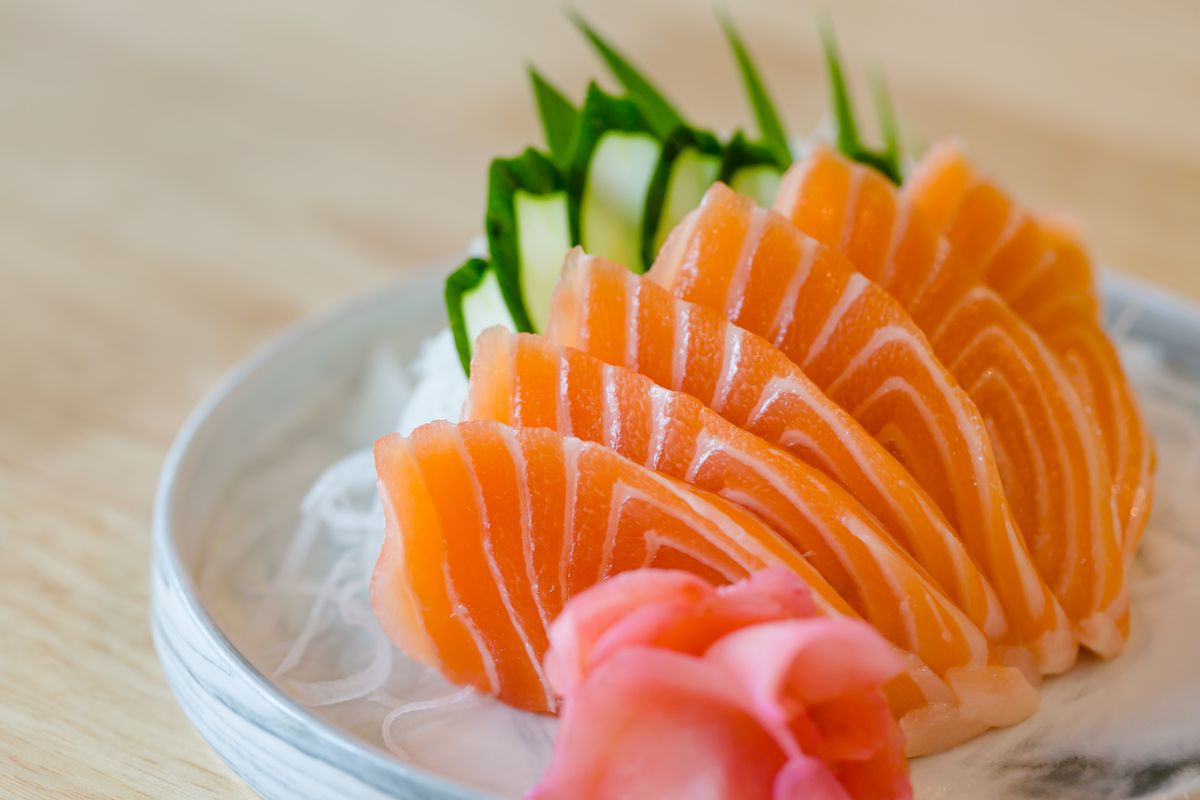 Salmon sashimi is a typical Japanese recipe usually served as an appetizer. Here’s how it is prepared and how it is served correctly.

There is nothing simpler than salmon sashimi and yet, to prepare it to perfection, there are so many things to know. In fact, you cannot become a chef if you do not first know how to handle the salmon steak to avoid health risks, how to properly cut the fish and finally how to serve it . In fact, Japanese cuisine is rigorous and never leaves anything to chance so if you want to try something truly authentic, then it’s time to prepare homemade sashimi.

Salmon sashimi: what it is

Before going into all the aspects to know for the preparation of this dish, let’s try to clarify what sashimi is. Sashimi refers to raw fish served in slices . The fish in question can be salmon, as we will see today, tuna, sea bass or the poisonous fugu, or puffer fish.

Sashimi is served without rice and this is the main difference between sushi and sashimi. In fact, the first is nothing more than rice with some type of seasoning (take a look at the various types of sushi so you don’t get caught unprepared), while the second is pure and simple fish. In fact, sashimi is served alone accompanied by soy sauce and wasabi, or with grated daikon root.

In salmon sashimi the calories are therefore those of the fish, given the marginal role played by the ingredients. It is a dish that, in moderation, can also be consumed by those who follow a low-calorie diet. In fact, salmon has about 200 kCal per 100 grams of product.

How to make salmon sashimi

We mentioned in the introduction the importance of treating raw fish correctly to avoid health risks. The discussion we are about to make therefore concerns all types of fish and not just salmon. Since this is a simple recipe, where the salmon is served alone, choosing quality fresh fish is the first step.

The salmon steak without skin and bones (you can ask the fishmonger directly to do this for you) must be killed . There are rules set by the Ministry of Health on how to kill fish properly. At home you will have to wrap the slice in cling film and place it in the freezer for 96 hours at a temperature of at least -18 ° C. The blast chiller clearly allows to further reduce the times but domestic ones are not yet so widespread.

How to choose salmon for sushi and sashimi is therefore not that difficult: the higher the quality, the better the result. For this reason we do not recommend the use of frozen fish steaks.

Now that we have our salmon steak cut and we no longer run the risk of eating it raw, let’s proceed with the preparation of the salmon sashimi with the original recipe. Remove the fish from the freezer and with a sharp flat blade knife prepare to cut. The cut of the salmon sashimi is of fundamental importance because the goodness of the dish is all here.

Salmon, like all other types of fish for sashimi, must be cut perpendicular to the fibers . The cuts must be clean and precise, so get yourself a properly sharpened knife. Then place the salmon slices on a plate and place them in the refrigerator for 20 minutes , just enough time for them to finish defrosting. Remove the sashimi prepared with the original recipe from the refrigerator just before serving.

So if you have always wondered what it means to cut sashimi, now you know what it is: a good knife and a cut of the fish perpendicular to that of the fibers. As for the thickness , the ideal one is 5 mm . Try to be as precise as possible.

But how to serve the sashimi? The sashimi should be placed on a plate as simple as possible , preferably white, in good order, possibly keeping the various types of fish separate. On the same plate you can put a teaspoon of wasabi , which will then be added to taste to the soy sauce served on the side, and some grated daikon root. If you serve sashimi in a dinner entirely dedicated to Japanese dishes, we recommend that you also bring marinated ginger to the table to be consumed between courses based on raw fish and cooked fish.

How to eat sashimi

A trip to the Japanese restaurant behind the house is enough to discover a thousand and more ways to eat sashimi, all wrong. However, it is not possible to rely on what the etiquette says because it clearly does not deal with this type of dishes.

Sashimi should be eaten just like they would in Japan, that is, with chopsticks . When we say with chopsticks, you don’t have to think of strange exotic uses like piercing a slice of salmon with one of them and bringing it to your mouth. We intend to hold the two bamboo sticks correctly, lift a slice of fish, dip it in the soy sauce and bring it to the mouth .

Speaking of “allowed” toppings with sashimi. Assuming that each of us can enjoy raw fish as they see fit, Japanese tradition requires that it be consumed only with soy sauce , enriched with wasabi if desired. Other whimsical combinations are banned. However, it is allowed, as we mentioned when talking about the plate, to serve sashimi with raw vegetables, useful for degreasing the mouth.

The most used is daikon root, white in color, but the most common carrots are also excellent. Cut them into julienne strips, reduce them into spaghetti with the special utensil or grate them with a grater with large holes and serve them in the same dish.

In short, preparing sashimi, from a time-consuming point of view, is really fast. Once you have learned and assimilated all the notions concerning cutting and serving, the game is done. You will have the opportunity to bring to the table an entire menu worthy of your favorite restaurant!