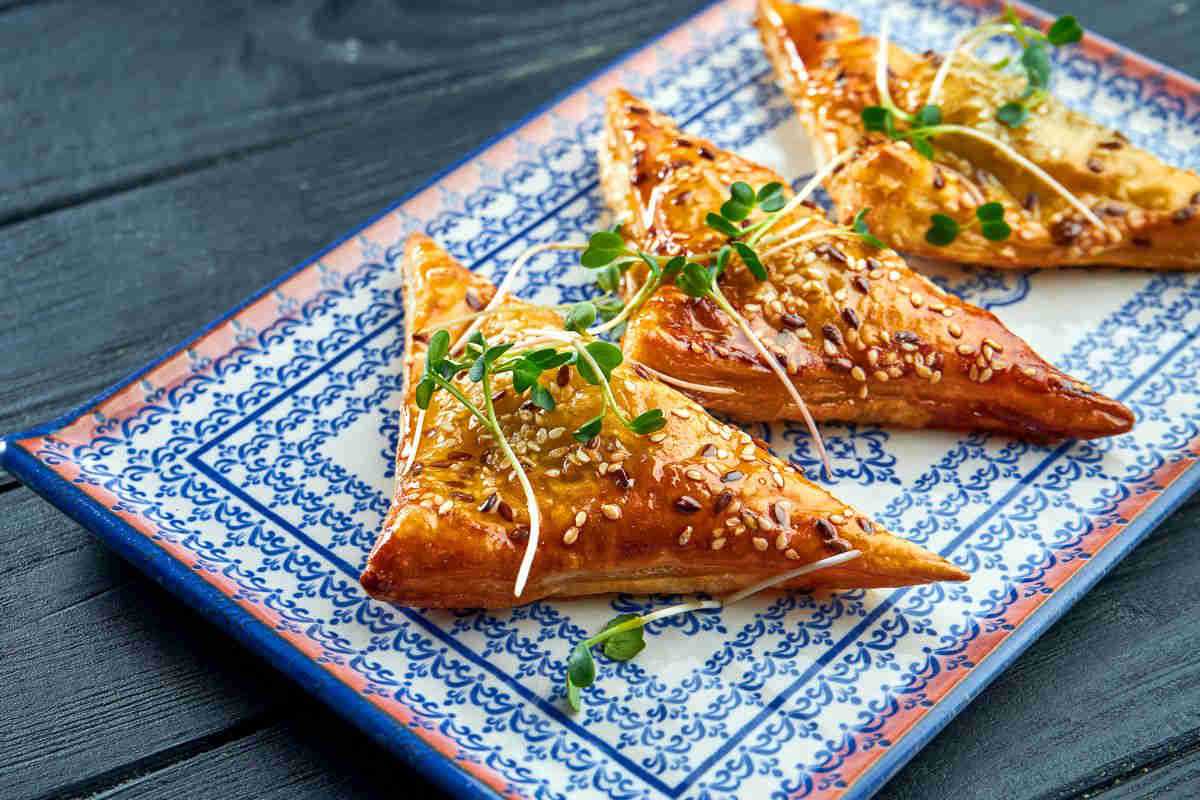 The phyllo dough in sweet and savory recipes gives crunchiness and creates a unique shell for your fillings. Here’s how we use it.

Until recently, phyllo dough was an ingredient unknown to most people. At most it was labeled as spring roll pastry (although we later discovered that the recipe was a little different), while only the most experienced were able to tell how to use the filo pastry for example in sweet recipes. Today, thanks to the fact that it is easy to find in all supermarkets, it is very popular due to its lightness that becomes crunchy during cooking. Here’s how the phyllo dough in recipes turns into something sensational.

Before discovering how to use phyllo dough in sweet and savory recipes, you should know that this thin and versatile pasta can be made at home. In fact, the recipe for phyllo dough includes a few simple ingredients. Here’s what they are.

In a planetary mixer or in a food processor, pour all the ingredients and start kneading until you get a smooth and homogeneous dough. Divide it into balls about the size of a walnut, wet the surface with water and let them rest for 40 minutes. Then roll them out one at a time with the pasta machine to the thinnest thickness and use the freshly prepared sheets of phyllo dough as per recipe. Keep in mind that the best way to appreciate its crunchiness is to make sure you overlap several layers.

Perfect to serve as a dessert at the end of a meal, alone or with a scoop of ice cream, the filo pastry bundles contain a soft filling made with vanilla-scented apples.

Peel the apples, core them and cut them into very thin slices. Put them in a bowl with the sugar, the apple juice and the seeds taken by scraping the inside of the vanilla bean. Overlap 6 sheets of phyllo dough, spreading a layer of melted butter between one layer and another. Do the same with the other 6 sheets. Divide the rectangles into 4 smaller rectangles of equal size and place a few apples in the center of each. Close in a bundle , stopping a piece of kitchen string, and cook at 180 ° C for about 15 minutes or until golden and crispy. Serve hot or at room temperature.

Few ingredients are enough to use the phyllo dough in savory recipes and the provola dumplings are an example. Crunchy on the outside and filled with melted cheese, they are perfect both as an appetizer and as an aperitif.

Brush a sheet of phyllo dough with melted butter then place a little grated provolone in a corner with a grater with large holes. Fold the phyllo dough on itself, giving the bundle the shape you prefer then cook at 200 ° C for about 5-6 minutes or until the wrapping is golden and crunchy. Meanwhile, melt the honey in the microwave and as soon as the bundles are ready sprinkle them with a drizzle of honey and decorate with the chopped walnuts with a knife.

Originally from Turkey and then spread to all the countries of the Middle East, burek owes its name to the rolled shape that is given to the phyllo dough. Then there is the filling which, depending on the area, can be made of meat, spinach and feta as we see today, or cheese .

Brown the chopped onion with the oil then add the spinach, letting them cook until they are wilted. Let the excess water evaporate and once cold mix them with the crumbled feta with your hands. Season with salt and pepper. Spread a sheet of phyllo dough and brush it with melted butter. Cover with another sheet then roll out a bead of filling two cm from the long side. Roll up tightly and lay in a round pan, forming a spiral starting from the center . Continue until all the ingredients are used up. Brush with milk and cook at 200 ° C for 20 minutes.

We stay in Turkey to discover a sweet recipe with phyllo dough: baklava (or). Layers of crunchy pastry alternated with a filling based on dried fruit and honey sprinkled with a sugar syrup. High-calorie yes, but also hyper-good!

Kataifi pastry is nothing more than phyllo dough cut into very thin spaghetti that gives its best once fried. That’s why we wanted to include shrimp in kataifi dough among the phyllo dough recipes , a real treat to serve as an appetizer .

First clean the prawns then spread the kataifi pastry. If you can’t find it, cut the overlapping sheets of phyllo dough into very thin strips. Then roll the spaghetti around each shrimp forming several layers and fry them in oil until golden and crunchy. Serve them immediately accompanying them to taste with sweet and sour sauce and adjusting, if necessary, with salt and pepper.

Undisputed symbol of Westernized Chinese cuisine , spring rolls are very easy to prepare at home. Ideal both as an appetizer and as a course of a dinner entirely dedicated to China, they are really simple to make.

Heat the oil in a wok then add the grated carrot, the bamboo cut into strips, the bean sprouts and the julienne cabbage. Cook for a few minutes, making sure they remain crunchy. Rehydrate the rice noodles in boiling water then transfer them to the wok with the vegetables seasoning with soy sauce, oyster sauce, a pinch of sugar, salt and pepper. If you like, add the minced meat or shrimp and continue cooking for a couple of minutes. Fold a sheet of phyllo dough in four, place a little filling and close, sealing with the beaten egg. Fry the spring rolls in two fingers of seed oil or bake them in the oven at 180 ° C for 15 minutes.

Sheets of phyllo dough with apples

Always taking advantage of the combination with apples seen above, we advise you to try the phyllo pastry sheets with apples : a real delight that will conquer all your guests.

Cut the apples into chunks and cook them for a few minutes with the butter then add the pine nuts, cinnamon, sugar and jam. Unroll the phyllo dough and make four equal rectangles of overlapping sheets then transfer them into 4 single-portion containers suitable for cooking in the oven (you can also make them smaller and use the muffin mold). Place the apple filling in the center and bake at 180 ° C for 20 minutes , serving with a sprinkling of icing sugar.

Croissants of phyllo dough with leeks and courgettes

An excellent appetizer is the one obtained by combining the crunchiness of the phyllo dough with the softness of the filling. This is how the phyllo pastry croissants with leeks and zucchini are born, strictly to be tasted freshly made.

Cook the courgettes into chunks and the leek into slices with a drizzle of oil. Season with salt and pepper then mix them with the diced scamorza. Use the filling to form your phyllo dough croissants (but also bundles or rolls) and close well by sealing all the edges. Decorate with sesame seeds if desired, then cook at 180 ° C for about 20 minutes , serving immediately.

Here is revealed how we use phyllo dough in sweet and savory recipes. They are inviting right?