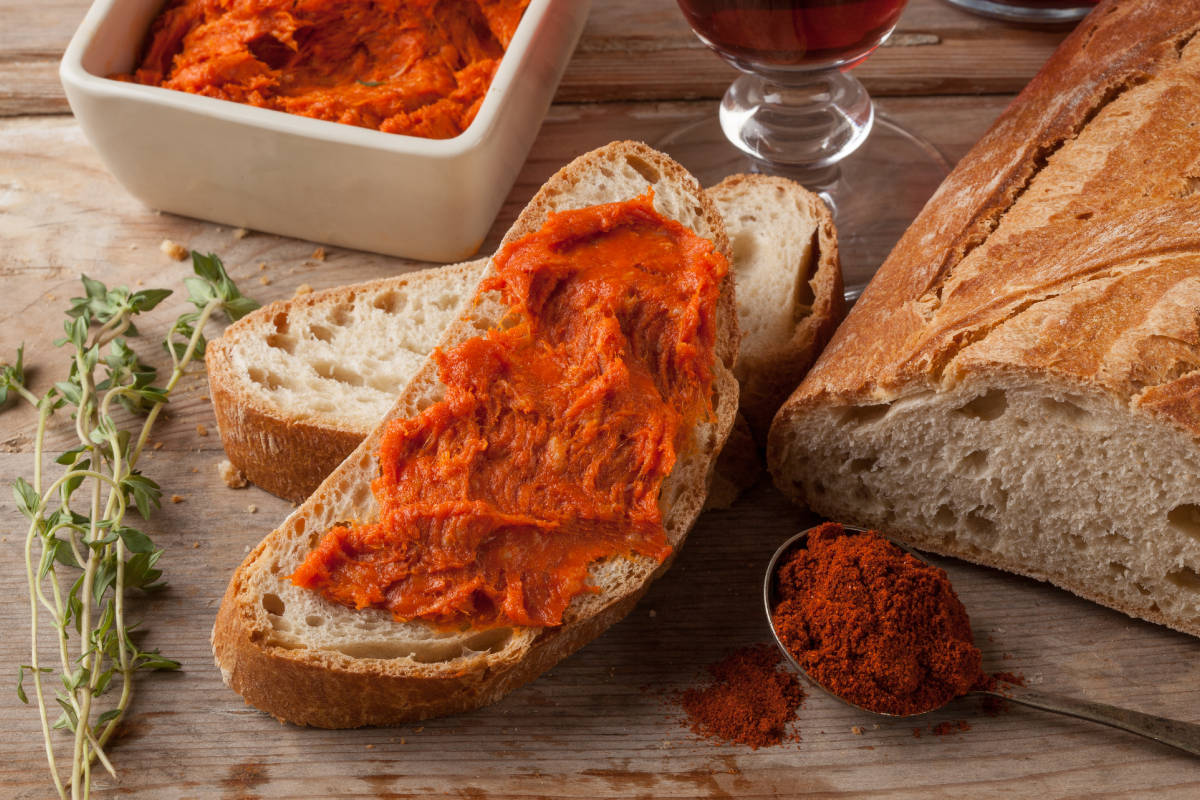 The 'nduja is a typical sausage of Spilinga, in Calabria, made with pork and spicy Calabrian pepper. Let's find out the recipe, how to eat it and the nutritional values.

Originally from Spilinga, a small town in the province of Vibo Valentia, the   'nduja , or also called duja , is a sausage known all over the world. It has a bright red colour, a creamy texture and a spicy and pungent taste. Today it is also an ingredient used in the gourmet menus of starred restaurants, but its origin is extremely poor: in fact, it was born in the Calabrian peasant society from the need to exploit every part of the pig.

The origin of the name of the Spilinga nduja is to be found in the Latin term induco , that is to introduce, which refers to the gesture of introducing the processed meat into the casing . Let's find out more about this precious sausage!

How is 'nduja made? Recipe

The Calabrian 'nduja has a very simple preparation method, which is handed down from generation to generation. At the base of his recipe is the spicy Calabrian chilli grown, harvested and dried naturally in the sun. The meat used for its realization is that of the pig and more precisely the fattest parts. The ratio of chili to meat is usually 1 to 2 .

For the actual preparation, the dried chillies are taken, minced and mixed together with the meat (also minced) in huge cauldrons; then salt is added. At this point the mixture is stuffed into blind casings (that is, in the upper part of the pig's large intestine) and passed into the smokehouse . In other words, the salami must be exposed to smoke for about ten days for about half an hour a day. Finally, the seasoning : before enjoying it, you must leave it for 3/5 months in a cool, dry place.

You can buy it ready-made (you can also find it online ) or even try to make it at home , but bear in mind that it is not a procedure for everyone, but only for those who have the time, dexterity and the place to dry and season the cured meat.

In summary, the ingredients of nduja are: 1 kg of minced pork, 30 g of fine salt and 450 g of dried hot peppers.

Start grinding the meat very finely: you have to get a coarse cream . Add the dried and powdered hot peppers and the salt to the meat: go slowly and taste gradually, but bear in mind that the spiciness will lose its intensity a little during the seasoning.

Once the mixture has been mixed well, stuff it into casings and leave it to rest for 12 hours before proceeding with smoking and drying.

Hang the 'nduja in a special room (preferably with a fireplace ) and take care to light a fire for at least half an hour for the first 10 days of smoking.

Before enjoying it, after smoking, you have to wait for 3/5 months (depending on how fresh you like the cured meat).

The 'nduja has no preservatives because the chilli pepper, present in such large quantities, has antiseptic and antioxidant properties.

The sausages will keep for a couple of months. If you think you won't be able to consume them in time, put them in a vacuum or in fat: they will last up to a year!

Recipes with 'nduja: how do you eat it?

Traditionally the 'nduja is melted in a rudimentary saucepan similar to an essence burner which has a hole inside which a candle is placed. Once melted, it is spread on slices of toasted bread and enjoyed as it is.

Today, however, it is also used to add flavor to meat sauces, sauces and, why not, even on pizza! It is present in many appetizers such as stuffed eggs and its spicy and intense taste is also the basis of many tasty first and second courses of starred restaurants.

Our favorite recipe, however, remains that of pasta with 'nduja : all you have to do is deprive it of its casing, toast it in a pan and then add some drained pasta al dente (and, if necessary, a little cooking water ). A delicious first course!

You can enrich courgette flowers or arancini with nduja, or insert it and use it to enrich an otherwise anonymous omelette . The only real limit is your imagination!

The main nutritional properties of 'nduja derive from the presence of chilli pepper. The latter, in fact, is rich in vitamins A, C, E, K and group B, as well as mineral salts such as potassium and copper and lecithin. Thanks to these nutrients, it increases resistance to infections, fights diarrhea and improves blood circulation.

The origin of 'nduja

The 'nduja does not have a clear origin, as is the case for many preparations of peasant cuisine. The stories about its birth are lost in time, handed down orally from generation to generation, as is the manufacturing method .

What is known is that it arises from the need not to waste any of the pork. In fact, it seems that, after having given the landowners its most valuable parts, the peasants were left with the waste such as the stomach, spleen, lungs but also the head and tongue. The first 'nduja was obtained from these and from the union with the chilli pepper.
Since it is a sausage that can be kept for a long time, this preparation ensured the supply of entire families during the cold seasons.

The 'nduja we eat today is not made with the entrails of the animal as in the past but rather with its fatty part . For several years, a day totally dedicated to this important sausage has also been established: on 8 August , the day on which, every year, the 'nduja festival is held in Spilinga.