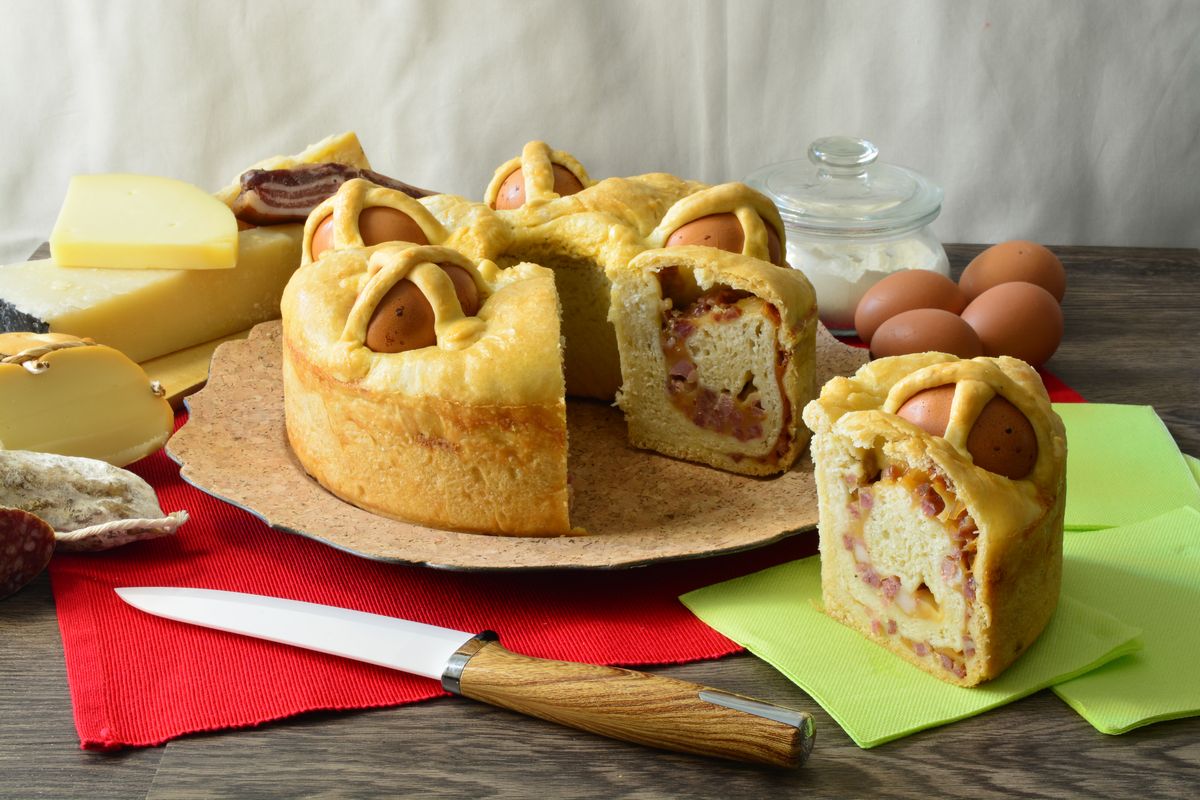 The Neapolitan casatiello is a savory rustic stuffed with salami and pecorino cheese and garnished with eggs, a must at the table during the Easter holidays.

Today we prepare the recipe of the Neapolitan casatiello, a rustic that is often served at Easter, very similar to tortano. This savory pie is nothing but a leavened product enriched with cubes of salami, pecorino cheese and decorated with eggs.

The substantial difference between tortano and casatiello lies in the use of eggs: in the casatiello they are placed on the ends of the salted donut , and then fixed with a cross of pasta, which takes on a Christian symbolism. In tortano , on the other hand, the eggs are an integral part of the filling. There are those who say, however, that the real difference lies in another aspect of the filling: in ancient times casatiello seems to have been prepared only with “poor” and easier to find products : such as lard, eggs and lard. Instead the tortano was more gourmet as a preparation, a prerogative of the richest families , and therefore also seasoned with meats and cheeses.

But no more chatter, what are we waiting for? Let’s see how to prepare this Neapolitan rustic: here is the original recipe of the salty casatiello!

How to make Neapolitan salty casatiello with the original recipe

If, on the other hand, you have the legendary robot , here’s how to make a casatiello with the Thermomix ! Did you know that you can also prepare it as a dessert ? Here is the recipe for the sweet casatiello .

Homemade rustic casatiello: all the variations to try

In addition to the traditional filling, for the filling, you can indulge yourself a little with the cold cuts and cheese of your choice . Naples-type salami should never be missing, but you can enrich it with pancetta, guanciale, provola, scamorza and many other cured meats and cheese that you like. The only advice? Do not use mozzarella or other wet dairy products, they will wet the dough and ruin your Easter casatiello.

A curiosity: in Naples they say “ yes, just ‘nu casatiello! ”To indicate a person who is a bit heavy, difficult , precisely this preparation. It will actually be difficult to digest this dish, but on the other hand we assure you that once tasted you will not be able to stop. Even children are crazy about it, especially for the decorative and edible eggs found on the surface. The eggs will have become hard-boiled after a long time in the oven and therefore absolutely good to eat … magati adding a pinch of salt.

If you want to learn more, here are all our proposals for your Easter menu and many other Easter appetizers !

Keep in a cool place for a maximum of 3/4 days . If you want, after cooking the casatiello, you can also freeze it in slices and defrost it if necessary.