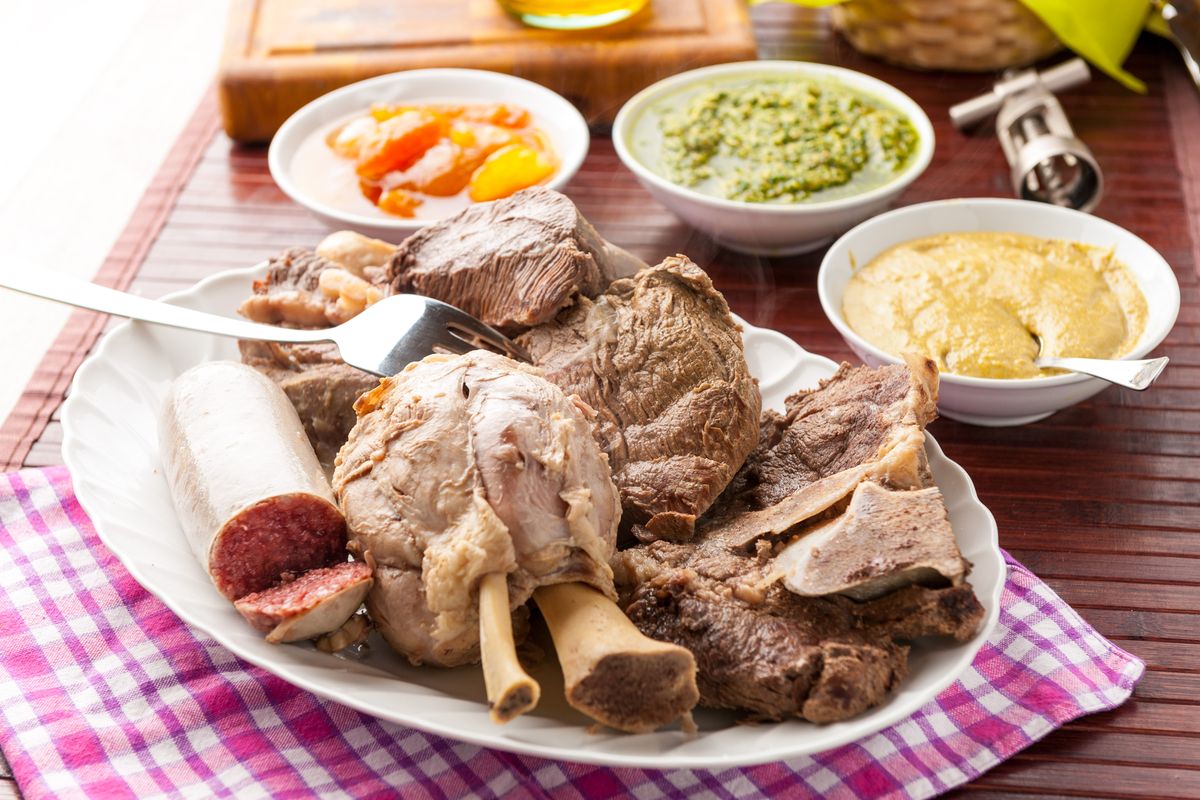 The flagship of Piedmontese gastronomy is the mixed boiled meat, a much more refined dish than it appears.

The mixed boiled meat or, more nobly, the Great Piedmontese Risorgimentale Historical Boiled so much loved by Vittorio Emanuele II is defined by a rigid disciplinary preserved by the Confraternity of the Boiled and the Madernassa Pear. It is made up of seven cuts of meat plus seven accessories or offal, accompanied by seven boiled vegetables : onions, potatoes, cabbage, turnips, courgettes, fennel and carrots and served with traditional sauces. In the classic version, in fact, the right cuts of meat for mixed boiled meats cannot be missing: that is the scaramella, the tenerone, scaramella, the thigh, the muscoletto, the shoulder, the tip bow and the priest’s hat plus the trimmings such as the tongue, head, tail, hen, zampino, cotechino and rollata.

Our Piedmontese boiled meat recipe does not follow tradition to the letter, it is a simplified recipe, where we have eliminated the most complicated parts and today difficult to find, but without detracting from the final result.

You will discover that cooking mixed boiled meat will not be that complicated: the rule to keep in mind is the different cooking times of the cuts of meat. Let’s go straight to the stove.

How to prepare the mixed boiled meat

If you are in the mood for boiled meat, but don’t want to embark on this enterprise and you like easy and light recipes, you should definitely try the boiled chicken recipe .

What are the sauces for mixed boiled meat

As we have anticipated, tradition dictates that there are not only cuts of meat and side dishes to be served on the table when preparing the Piedmontese mixed boiled meat. Originally, this institution also had to be served with seven very specific sauces : the rich green sauce , the rustic green sauce, the horseradish, the red sauce , the mustard, the cugna and the honey sauce. Again, finding or preparing them all can be difficult. At the supermarket you will certainly find most of these baths, even if they may not have been made as they were originally.

In fact, over the years, traditions have also changed. Now with the mixed boiled meat you cannot miss a good homemade mayonnaise , or mustard. For this reason we absolutely do not want to force you to choose a sauce instead of another, our advice is to combine the one you prefer without worrying about making something wrong or doing wrong to the history of Italian cuisine. After all, cooking and eating must be a pleasure and an act of love .

We recommend that you consume the boiled meat within 2 days of making it and store it in the refrigerator in a container with a lid. Instead, you can freeze the broth that you will get from cooking in the freezer, and use it at the moment for soups and risottos.